The Power of Ongoing Education

Widener continues to be at the forefront of higher education and societal issues because agility, adaptability, integrity, and optimism are in our institutional DNA. Those qualities are in you, our graduates, as well. Whether you have been out of college for 4 months or 40 years, Widener has the educational resources to quench your thirst for knowledge and to feed your curiosity – today, tomorrow, and always.

A Spotlight on Diversity & Inclusion

I am pleased to have this opportunity to update you about what Widener is doing in the areas of diversity, equity and inclusion.

Diversity, equity and inclusion is an institutional priority , as indicated in Widener University's Executive Team Goal: to advance a culture of diversity and inclusion. We are committed to increasing diversity, in all of its many dimensions, at our university. We have a sincere desire that all members of the Pride family, including our alumni, experience a sense of belonging at Widener, when you reach out to your alma mater, whether you are connecting with current students and faculty or reaching out to staff in the Career Design and Development Office.

We are intentionally focused on building a strong foundation to support a diverse, equitable and inclusive climate for all members of the university community. For example, on September 9th, Faculty Council voted to approve a Faculty Council standing committee for Diversity, Equity and Inclusion and the Diversity Leadership Inclusion Council (DLIC) has been reorganized to include greater representation from our three campuses. DLIC membership also includes undergraduate and graduate students. Over the past several months, students, faculty and staff have engaged in numerous conversations and workshops through their participation in DiversiTeas and "We're All Widener" Workshop series.

As alumni members of the Pride family, you are an important part of this journey. During Homecoming, I encourage you to explore the educational resources provided here on the Homecoming Hub. I look forward to sharing more information with you as initiatives develop. In the meantime, I welcome your ideas and feedback. Feel free to contact me at:
mmdavis@widener.edu. We're All Widener!

LGBTQIA+ at Widener (Digital Collection): This collection follows the LGBTQIA+ story on Widener's campus across several decades of its history. 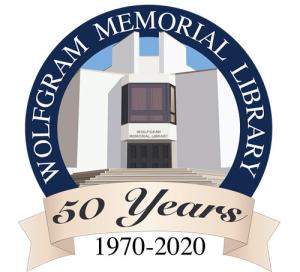 This November marks 50 years of Wolfgram Memorial Library—the gem at the center of our campus. As a way to celebrate, we invite you to explore this collection of videos and digital exhibits that will have you taking a walk down memory lane.

Earlier this fall, alumni, students, faculty, and staff were invited to submit their favorite library memories. We took these stories and compiled them into one video to showcase our collective appreciation for this beloved building. Looking back on the past 50 years has us eagerly looking forward to the next 50 and beyond!

William Wolfgram ‘43 excelled at Pennsylvania Military College and was dedicated to serving in the military. After graduation, he joined the 10th Mountain Division and served in WWII, where he gave his life for his country. Inspired by William’s love of learning, his parents, Edith and Frank Wolfgram, chose to honor his memory in the form of a library, which the institution greatly needed to accommodate a growing student body and the expansion of many academic programs. The groundbreaking took place in 1968, and construction was completed two years later. At the dedication on November 7, 1970, Edith Wolfram stated, “If any kind of noble memorial to him is in keeping, it could not take any other form than a library.”

When it opened, the library was celebrated for embracing the 'new media' at the time – microfilms, transparencies, and filmstrips. Over 50 years later, it features a robust digital presence, more than 100 computers for student use, nearly 200 scholarly databases, and current multimedia technology. This ‘jewel of the campus’ continues to serve students, faculty, staff, and the Chester community by providing resources and services to support their academic pursuits.

This collection chronicles the history of the library by focusing on several key themes, including:

Thinking about taking your education to the next level? You’ve come to the right place!

Searching for an advanced degree in a nationally recognized program? We’ve got it. A certificate program to give you the competitive edge? Sure thing! What if you just want to exercise your mind for the fun of it? Try one of our free, self-paced courses. The options are endless! No matter what you’re looking for, Widener has the options to keep you on the Inside Track to success.

Explore additional Career Design and Development workshops for alumni! Widener alumni are warmly invited to attend these all-virtual professional development workshops. This is the perfect time to power up your LinkedIn profile, sharpen your interviewing and negotiating skills, and learn pro tips on making a camera-ready virtual impression!

Need CEU credits for your licensure? Keep an eye out for upcoming CEU events.