May 13, 2020 Mary Allen, Director of Communications

The Army ROTC program based at Widener University celebrated the momentous achievements of 15 cadets this week as they swore their military oath of commission and assumed new roles as Army officers.

The virtual commissioning ceremony conducted over Zoom and Facebook Live was attended by hundreds of well-wishers who huddled in front of computer screens around the world, and erupted in cheers as the cadets were announced as second lieutenants.

Four Widener University students were among the 15 cadets commissioned. In total, the group of 15 hailed from four area universities and all trained through the Dauntless Battalion unit at Widener.

The new officers, who are also earning their undergraduate degrees from Widener this week, included:

The class heard from Brigadier Gen. Brian S. Eifler, Army Chief Legislative Liaison, who explained what it means to serve as an officer in the U.S. Army.

“It means you’ve decided to put nation first – above yourself, above your family, above everything. And that’s a special breed. Not everybody can do that,” Eifler said.

He gave the new officers three pieces of advice for practicing the fundamentals of leadership: take care of your people, always be professional, and remember to stay humble.

“Whatever we’re facing, whether it’s an adversary or COVID-19, the nation calls – we answer. And the Army continues to roll along,” Eifler said. “Just like today, we are not going to be stopped by the Coronavirus. We are going to continue to get through this, to get you commissioned, and off to service. Because our nation needs you.”

The group also heard from Lt. Col. David Gunther, professor of military science and officer in charge of the ROTC program at Widener. He said dauntless was the perfect word to describe the cadets, who are courageous and determined. They persevered through challenging academic coursework, early morning physical workouts, trainings around the country and sometimes around the globe.

“They’ve hurdled every little thing that was thrown at them, and done so with the greatest of attitudes,” Gunther said. “I could not be any more proud to call them teammates and welcome them to the greatest organization in existence today.”

Second Lieutenant James F. Hennelly took his oath at his home in West Goshen, Pennsylvania. His former Widener classmate 2nd Lt. Eric Guzy, who was commissioned last year when he graduated from Widener, was there to administer the oath.

“This day has been something I’ve been working for, for four years. I spent years doing military training along with schoolwork. This journey to get here was difficult but I look forward to serving my nation and leading the sons and daughters of America,” Hennelly said.

He will be stationed with the First Infantry Division in Fort Riley, Kansas. 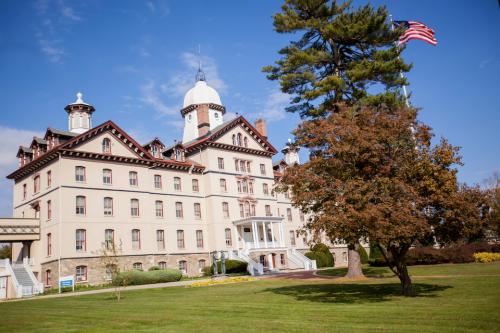 Alumnus Gets National Award for Service on Widener Board

Widener Board of Trustees Chair Paul Beideman, who has been a champion for the university and its programs, is receiving a national award in connection with his service.