“That’s one small step for man, one giant leap for mankind.”

Fifty years ago – on July 20, 1969 – American astronaut Neil Armstrong shared these famous words as he became the first person to walk on the moon.

The Apollo 11 lunar landing was a historic moment that inspired future generations and set the foundation for half a century of space exploration, from the Space Shuttle missions to the International Space Station to unmanned missions to Mars.

Professor Harry Augensen, director of the observatory, also shared his memories of the lunar landing and his thoughts on the future of space exploration:

What were you doing when Apollo 11 landed on the moon?

I was watching the landing on television at a friend's house, located on a nearby farm in northern Illinois. My friend was also destined to become a Ph.D. scientist, a research biochemist, working on polymers for the U.S. government.

During that summer of 1969, I worked in the shipping department of a factory that produced springs primarily for the automotive industry. In the evening, I usually came home dingy as a coal miner, my clothes often stained with industrial chemicals and my lungs full of factory smoke and dust, the unavoidable consequence of working in that type of job. But, I needed to earn the extra money for help with college expenses.

Although early the next morning, I was back in the factory packing springs and other automobile parts to be installed in Earth vehicles, the historical achievement that I had just witnessed inspired me (and doubtless countless other teenagers) to become scientists.

Did the moon landing influence your decision to pursue astronomy?

I had already determined to pursue a career in astronomy by this time. However, it did convey an excitement that we had taken one "giant leap" forward in our exploration of the universe.

In the history of space exploration, how would you rate the landing on the moon in terms of significance?

It certainly was a significant moment, demonstrating conclusively that humans are capable of leaving Earth, traveling to other bodies in space, and returning to Earth. However, I believe even more significant findings have been obtained from the unmanned robotic probes which have traveled far beyond the moon to explore both the inner and outer solar systems. These probes, such as those of the various Mariner, Viking, and Voyager missions of the 1960s, 70s, and 80s, tremendously expanded our understanding of the planets and their moons. More recently, unmanned spacecraft have provided us with close-up views of comets and asteroids, as well as provided more detailed information on the planets. 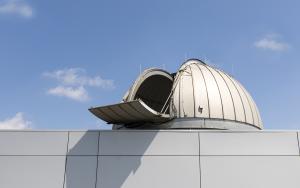 What do you think will be the next great accomplishment in understanding our universe?

I hope that we can gain a greater understanding of the nature of dark matter and dark energy, which are key to an understanding of the origin and fate of the universe.  The trouble is that, by their very nature, they are not directly detectable, but scientists are clever and will hopefully be able to deduce their nature within the next several decades.

What would you like to learn or see happen in terms of space exploration in your lifetime?

I would be delighted to see developed a means of space travel that is a quantum leap ahead of the conventional rockets that have been used since the dawn of the space age. Currently, it takes a conventional spacecraft about three days to reach the moon, and about eight months to reach the planet Mars. A trip to one of the nearby stars would take tens of thousands of years, and that is clearly not feasible.

A number of innovative techniques have been proposed, including the possibility of employing “wormholes” in space, as popularized in Carl Sagan’s book “Contact,” but thus far these methods are more science fiction than science fact.

Although I’m not overly optimistic for myself to see it, some of my 20-year-old students might just live long enough to witness interstellar travel. To put things into perspective, H.G. Wells published his novel “The First Men in the Moon” in 1901, two years before the Wright brothers flew their first experimental airplane at Kitty Hawk, North Carolina.

The notion of machines flying even short distances through the air, let alone through space and reaching the lunar surface, was considered pure fantasy. Yet, the Apollo 11 astronauts landed on the moon 68 years later, and so a number of college students in 1901 would have lived long enough to see Neil Armstrong descending to the lunar surface.