Completing an undergraduate degree is supposed to be academically challenging. Add on extra curriculars, additional study programs, work, and a global pandemic, and suddenly that path to completing a degree gets a lot more strenuous. All of these things combined were no match, however, for Alexandra Polón, who has been chosen to receive the university’s 2022 President’s Award, one of its highest student honors.

Polón’s time at Widener has been exceptional. The Maryland native will graduate with the class of 2022 having completed two bachelor’s degrees in biology and Spanish as part of the university’s 3+3 pathway to a doctorate in physical therapy (DPT), which she will complete in 2024.

“I initially found Widener because it was one of the few schools that offered an accelerated DPT program,” said Polón. “Most programs are seven years, but Widener condenses it to six, which saves you a whole year of time and money so that was very promising and attractive to me.” 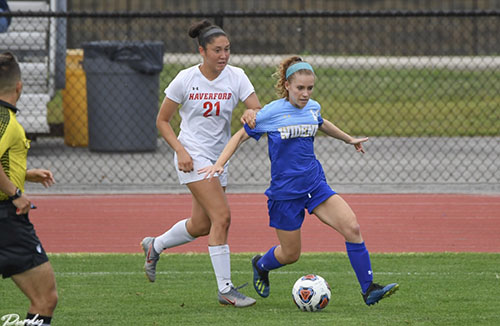 Her interest in physical therapy began long before college. An avid soccer player, Polón was introduced to the occupation when she was injured and needed physical therapy to return to the field. This, coupled with her mother being an occupational therapist, put Polón on the DPT track.  “It opened my eyes to a profession in which I get to help people not only reach their prior level of function, but hopefully surpass it,” she shared.

Pursuing a biology degree put Polón on the 3+3 pathway, and her Spanish degree honors her Hispanic heritage and family roots in Argentina. Working with her advisors, Polón found a way to combine the two and implement her skills even before graduation by participating in an independent study where she created a bilingual English and Spanish glossary of physical therapy terms which is now being used in the university’s Chester Community Clinic.

The President’s Award recognizes one student each year who has contributed to campus life through scholarship and participation in extracurricular activities. In addition to her role as a student athlete, Polón also serves as a resident assistant, and participates in numerous clubs, organizations, and service opportunities.

“I am delighted to honor Alex with the President’s Award this year,” Widener President Julie E. Wollman said. “Her contributions to the university as a student leader, an athlete, and a dedicated scholar, and her dedication to the Chester Community Clinic and especially its Spanish speaking clients, have been extraordinary. She is doing great things and she is on track to do even more! I am confident she will continue to make Widener proud as she completes her DPT and uses it to make a difference in the lives of the people she works with.”

While she didn’t join these activities with the intent of being recognized with this award, Polón has found benefit from her involvement and plans to continue being involved for the remainder of her time at Widener.

“I’ve met some of my closest friends from some of the different things that I’ve participated in. It also felt good. In some ways I was able to give back to Widener which is giving me my future in the form of an education.” - Alex Polón

Looking ahead, Polón looks forward to completing her doctoral degree and exploring the numerous pathways physical therapy has to offer.

“It’s hard for me to narrow in on one ideal setting that I want to work in, but personally I see that as a good thing because it will allow me the freedom of switching between settings in my long career to come,” Polón shared. “I’m currently trying to set up some clinicals with local baseball and soccer teams to hopefully gain exposure in that setting.”

For students considering a DPT degree at Widener, Polón advocates for using all of the resources available in order to ensure success.

“Take advantage of all of your resources whether it’s going to office hours or utilizing tutoring services like the writing or math center,” she said. “I will say that I’ve used almost all of those and it’s not necessarily because I was struggling in a class, but it was because I wanted to thrive and be able to thrive at the next level.