Ashton Reese was weeks away from finishing her bachelor’s degree at another university last spring when the economy collapsed amid the coronavirus pandemic.

However, Reese doubled down. She applied to jobs in the mental health and criminal justice fields and tried to leverage skills gained at an internship she held before the pandemic.

“It got to the point where I had applied to at least 40 jobs in a week. That is when the reality set in – things are not going back to normal as quickly as I had thought. I realized less employers were hiring, or they were implementing strict guidelines in response to the coronavirus.”

Reese’s solution: graduate school. She enrolled in Widener’s criminal justice master’s degree – a program that enables her to not just bide her time during the slump but also to thrive and gain in-demand skills to launch her career in any economy.

“In the current economic climate, we see a lot of people turning to graduate school,” said Vice Provost for Academic Affairs and Strategy Kim O’Halloran. “They see graduate school as a way to succeed in a world that is changing rapidly and will continue to change rapidly.”

“Graduate school can be an opportunity to make a career change so that when the economy recovers, they’ll be prepared to work in growing industries,” O’Halloran said. “This makes them stronger and more viable to employers.”

Many people recognize that graduate school can help them after a job loss or decreased wages, and it can serve as the foundation for future salary growth. The expected lifetime earnings for someone with a master’s degree are $2.7 million, compared to only half that for a bachelor’s degree, O’Halloran said.

But, what has been truly unique during the pandemic, and even before, is how Widener is meeting the demands of this growing population of graduate students. Widener is offering flexibility and convenience across a wide variety of new and existing programs and certificates in emerging fields.

Graduate students can expect to find flexible course schedules, including part-time or full-time, evening or weekend, in-person or online, and fast track or go-at-your-own pace. Students can customize their experiences to specialize in certain areas or pursue a broader base of knowledge.

“Widener is meeting this demand of the current environment,” O’Halloran said. “Widener is delivering on that promise.”

How to Stand Out

Alumnus Chuck Liedike '08 saw firsthand how a graduate degree can propel a career, through both a strong and a weak economy.

In 2006, Liedike was newly done with his undergraduate degree and was working on a political campaign, when he decided to pursue a master’s degree in public administration at Widener. He wanted to deepen his understanding of local government and build a network with other professionals in similar fields.

“For me, Widener was absolutely a great decision,” he said. “Widener allowed me to separate and differentiate myself from others in my career.”

Liedike’s concentration in local government helped him grow his career for years, from managing a statewide grassroots campaign to serving as a township supervisor. He was able to thrive even as the recession dragged on from 2007 to 2009.

Today, he works as the field operations and grassroots manager at the Pennsylvania Association of Realtors®, where he advocates for Realtor members on local government issues.

“The master’s program put me in a position where I could move forward, and the concentration laid the foundation for a lot of that knowledge,” he said.

Reese hopes a master’s degree at Widener will lead her to similar success.

“I hope the criminal justice master’s degree will help me eventually work in the prison system on mental health advocacy,” Reese said. “It is something I am very passionate about.”

See All Graduate Programs and Certificates 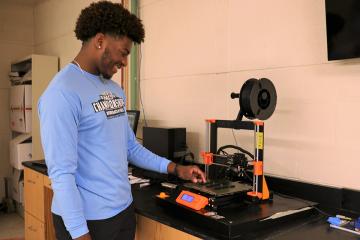