The Widener University athletic department is excited to announce the addition of its 24th varsity sport and its first co-ed team as the Pride begins competition in Esports.

"Widener University looks forward to expanding our programming into Esports this fall and all it has to offer our students as a new team within the athletic department," said Widener Director of Athletics Jack Shafer. "This group will be a part of our athletic teams – they will train and compete as a team, have a dedicated on campus space, and be led by a quality coaching staff to compete in head-to-head multi-player games that will be broadcast for a live audience."

Widener will be the fourth school in the Middle Atlantic Conference to offer Esports at the varsity level. A national search is underway for the first head coach of the program.

The Esports industry has grown by leaps and bounds over the past few years. Short for electronic sports, Esports involves teams competing head to head in multi-player games in front of a live audience or online through gaming broadcasters such as Twitch and YouTube.

The Pride will compete in the National Association of Collegiate Esports (NACE), the country's most prominent organization dedicated to competitive collegiate video gaming. Widener will battle in Hearthstone, Overwatch, and Rocket League games.

Hearthstone is a competitive, collectible card game where players try to outwit and outsmart their opponents using cards that reflect monsters and magic spells.

Overwatch is a multiplayer game in which players are divided into two teams of six. Each player selects from a roster of more than 20 heroes as teams work together to secure and defend control points on a map, or escort a payload across the map in limited time.

Rocket League has been described as "soccer with rocket-powered cars." One to four players are assigned to each of the two teams and use rocket-powered vehicles to hit a ball into their opponent's goal, scoring points over the course of a match.

According to a report from industry firm Newzoo, Esports accounted for $665 million in revenue last year and could exceed $900 million this year. Other projections predict the industry could top $1 billion with money pouring into professional Esports leagues featuring franchise teams and sponsorship deals. Widener Class of 2020 Undergrads: A Look Back

Before they graduate, we're taking a look back at the Class of 2020 and their time at Widener. 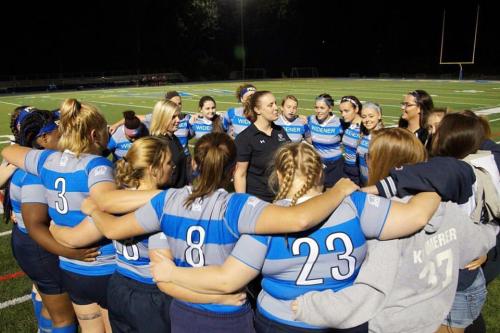 Nearly all of the current club team coaches are Widener graduates and former players themselves, drawn back to the university and their teams as a way to give back and stay involved. What is it that unites us? What is it that drives us to paint our faces and cheer on our football team? Or march on the field with brooms? Or painstakingly decorate golf carts? The answer is a nine...