When Mamadou Keita emigrated from his West African home country of Guinea to Darby, Pennsylvania, he had a mission: earn a college degree.

Now, with that mission accomplished twice – a bachelor’s degree in international relations and French and a master’s degree in public administration, both from Widener University – he is helping young Guineans pursue their own education.

“I am very fortunate to have come to this country and received one of the best educations,” Keita said. “My mindset now is ‘how can I give that type of opportunity to others back home in Guinea?’”

At just 29 years old, Keita '13, '18 is president of the nonprofit Guinean Alliance for Education and Development (GAED), in addition to working as a software contract administrator for Agilent Technologies. With GAED, he is leading a global team of more than 30 volunteers and achieving impressive results.

Their efforts have led to eight top-ranked students in Guinea getting nearly $21,000 in assistance for college, 40 children receiving bicycles to travel to and from school, and the launch of three learning resource centers with 73 donated computers at universities across the country.

And, the nonprofit – and Keita – are just getting started.

Nestled along the Atlantic coast of West Africa, Guinea is a country rich in both natural resources and a unique culture shaped by dozens of ethnic groups and French influence from colonial times.

The country faces many challenges. Much of the population is poor, with 43 percent living on less than $1.25 per day, especially in rural villages where employment and services are lacking.

Similarly, the country’s educational system is struggling. While schooling is compulsory to age 13, only 40 percent of boys and 25 percent of girls progress to secondary education – and only 25 percent of the adult population can read, according to UNICEF.

“My mom used to say, ‘don’t come back to Guinea until you have a college degree,’” Keita recalled. “I knew I had a mission coming to the United States, especially being my mom’s oldest son.”

At age 16, after waiting three years for an immigrant visa, Keita moved to his father’s home in Darby and enrolled in Penn Wood High School.

He quickly learned English and became a permanent fixture on his high school honor roll. He never wavered from his family’s goal and saw firsthand that education would be the key to his future.

A Movement for Change

With his high school success, Keita started applying to colleges, but he only felt ‘at home’ on one campus – Widener's.

It wasn’t just the fact that Keita’s father was studying in Widener’s Extended Learning program or that the faculty provided the personal mentorship Keita knew he would need.

It was that Widener inspired him. 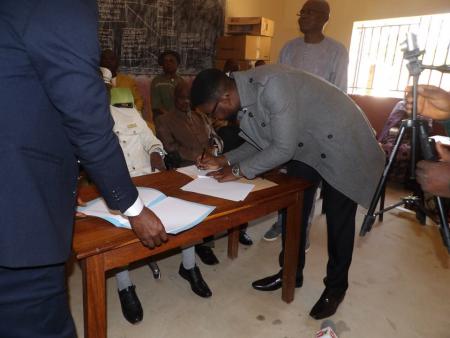 A youth movement, led by then-Senator Barack Obama, was sweeping the nation in 2008. After Obama drew more than 9,000 people to a rally on Memorial Field behind Old Main one week before the election, Keita knew Widener was the place he wanted to be.

“I realized I wanted to serve others,” he said. “I wanted to change people’s lives.”

That spirit followed Keita throughout his entire time at Widener.

He exceled both inside and outside the classroom – minoring in African and African American studies and starting a campus French Club. He held leadership positions in several honor societies and clubs and frequently organized service activities, including raising funds to send eyeglasses to people in Haiti.

He was featured in marketing materials for the Widener Fund, showcasing to donors the importance of scholarships for students like him. And, this was all while he worked full time. He also enlisted in the U.S. Air Force Reserve his junior year at Widener.

“He was enormously curious as a student and incredibly hard working,” said French Professor Stephanie Schechner, who has mentored Keita and now serves as chair of GAED’s advisory board. “I could see that even at a young age he thought deeply and profoundly about the world around him.”

In 2012, the summer before his senior year, Keita’s passion for service guided him on a life-changing trip to Chicago for the First Symposium of the Guinean Youth of the Diaspora. The symposium was an opportunity for Guineans in North America to meet and reflect on solutions to the challenges facing Guinea.

As the youngest conference presenter, Keita led a discussion on developing leadership skills in Guinean youth.

“I went there with the idea of seeing how we could find synergy between things we do with students here and students back home in Guinea,” Keita said. “I wanted to share ideas on how to develop our own communities.”

It was on this trip that Keita met Mamadou Alpha Barry, the founder of GAED. They realized that they did not just share a first name; they also shared a passion for education in Guinea.

Keita returned to campus after the conference with a clear role in the future of GAED.

After securing tax-exempt status and receiving initial funding, the nonprofit decided to support promising Guinean youth who wanted to attend universities in the United States or other countries but did not have the financial means to do so.

“Our mindset was even if it was just one, two, or three students, we want to make a difference,” Keita said. “In return, we wanted those students to come back to Guinea and give back with some type of service or teaching.”

But, as the scholarship applications began to roll in, another challenge struck in Guinea.

A two-year-old child died in a village in the southeastern part of the country. A week later his mother, sister, and grandmother also fell ill.

Within months of that first case, the Ebola outbreak spread to other villages and into the capital city of Conakry.

The Ebola outbreak, the most widespread of its kind, killed more than 11,000 people in Guinea, Liberia, and Sierra Leone and snarled travel from West Africa, as panic spread around the world.

The nonprofit suddenly had to change course. Instead of sending one student abroad, a task that seemed increasingly difficult with the virus spreading, the team decided to help students receive the best education possible in Guinea.

They provided scholarships to eight students ranked at the top of their high school class to pay for books, transportation, and other necessary supplies as they enrolled in public or private universities in Guinea.

“I am so proud that all of those students have finished and moved on to study overseas,” Keita said. “They are studying around the world in France, Russia, and India.”

The challenges in Guinea are vast – from the Ebola outbreak and spread of HIV/AIDS to childhood malnutrition and adult illiteracy.

But, the solutions are not impossible if Guineans lead the way.

“In Guinea, you have different stages of development overlapping,” Schechner explained. “You have 19th century village life intersecting with 21st century modern conveniences. It makes it very difficult for anyone outside the country to come up with solutions.”

That’s where GAED has stepped up. 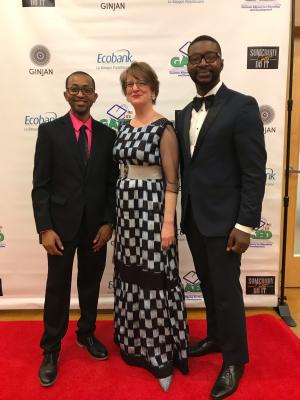 Since that first round of scholarships, the nonprofit has grown under the direction of Keita, who became president in December 2016.

“Progressing through the master’s of public administration studies at Widener gave me a professional mindset to organize and market the nonprofit and establish relationships with donors,” he said. “For small nonprofits to be successful, you have to think like an entrepreneur, but you are also working with people on a volunteer basis.”

He has focused on fundraising, via an annual gala in Washington, D.C. and smaller events, including talent shows at Widener. He then used the profits to launch initiatives that empower young Guineans through education.

For example, after realizing that transportation could be a barrier to school attendance in rural villages in Guinea, the nonprofit supplied bicycles to children. And, after realizing that Guineans in the United States can feel overwhelmed by the college admissions process, the nonprofit launched a ‘Road to College’ initiative that offers mentorship.

To date, the nonprofit’s biggest venture started after UNESCO named Conakry a World Book Capital in 2017. Cities with this designation promote books and reading as part of a yearlong campaign.

But, GAED realized that youth in Guinea do not need more books – they need computers. Keita was surprised to see that one of the largest universities in Guinea – University of General Lansana Conte of Sonfonia – had a lab with only eight functional computers for 22,000 students. Another Guinean university leading Ebola research had none.

So, he went to his employer – Agilent Technologies in Wilmington – with a request.

“I asked if they would donate the computers they no longer needed,” Keita said.

The company agreed, and, in December 2017, GAED opened its first computer lab with 38 computers at University of General Lansana Conte of Sonfonia.

Agilent has continued the donations, helping to support the creation of three labs at three institutions across the country. Most recently, Schechner and Keita traveled to Labé in December 2018, where they celebrated with the university’s rector and the state’s governor the opening of another computer lab at a university focused on STEM preparation.

During that same trip, they also met with the minister of higher education and other officials to discuss how to mobilize in Guinea and ease the process for donations.

“Being part of those conversations in Guinea was a really transformative experience,” Schechner said. “I definitely feel the pride of a parent watching Mamadou in all that he is doing in Guinea.”

Keita credits this success to the guidance he received from Schechner and other professors at Widener. It has moved him to serve others, both in the United States and Guinea.

“Widener prepared me to be a leader,” he said. “And, that is what I will do.” 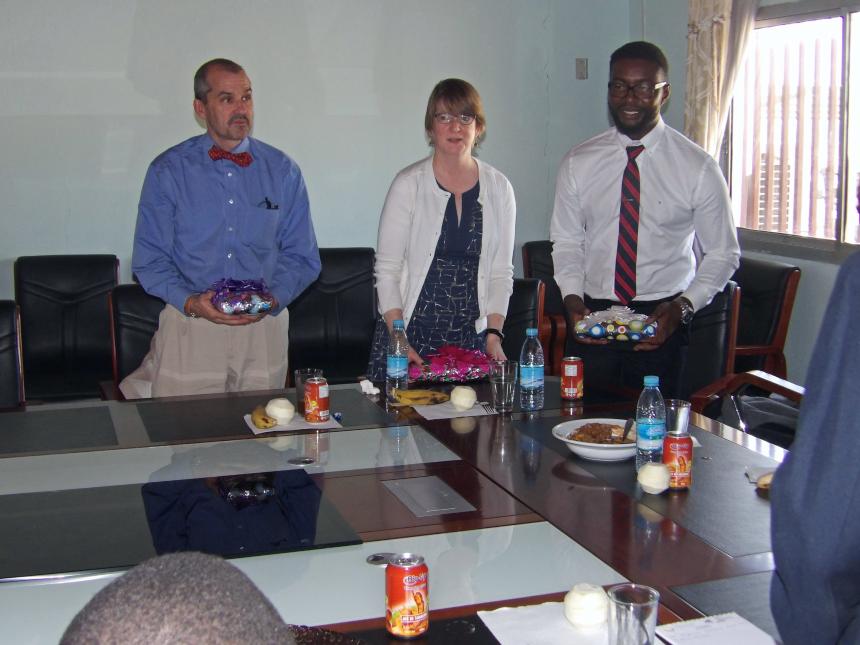 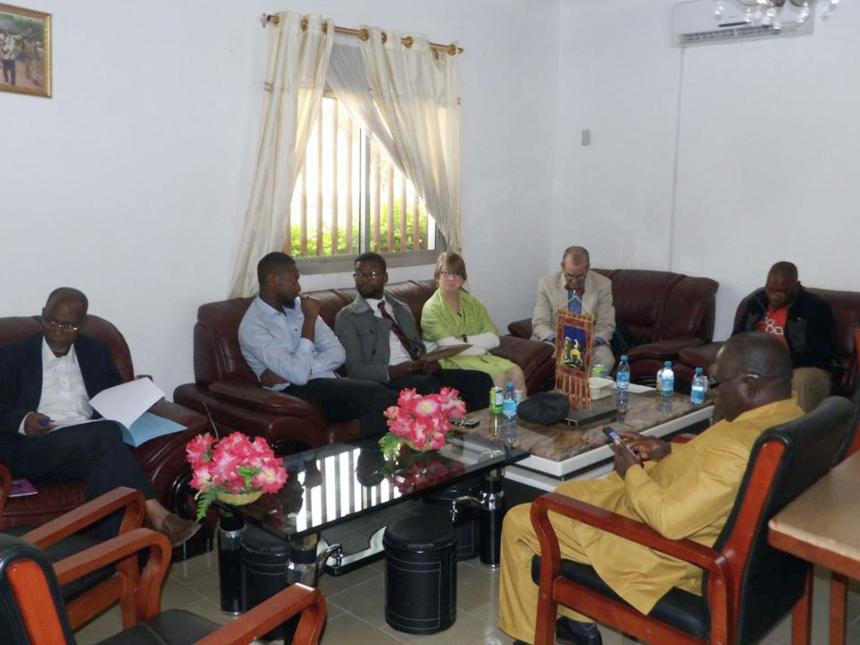 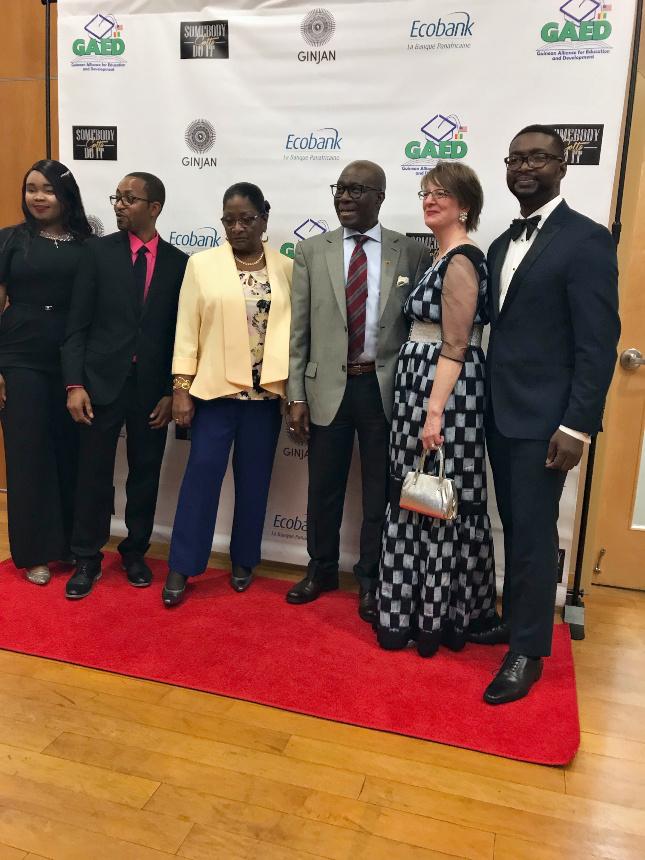 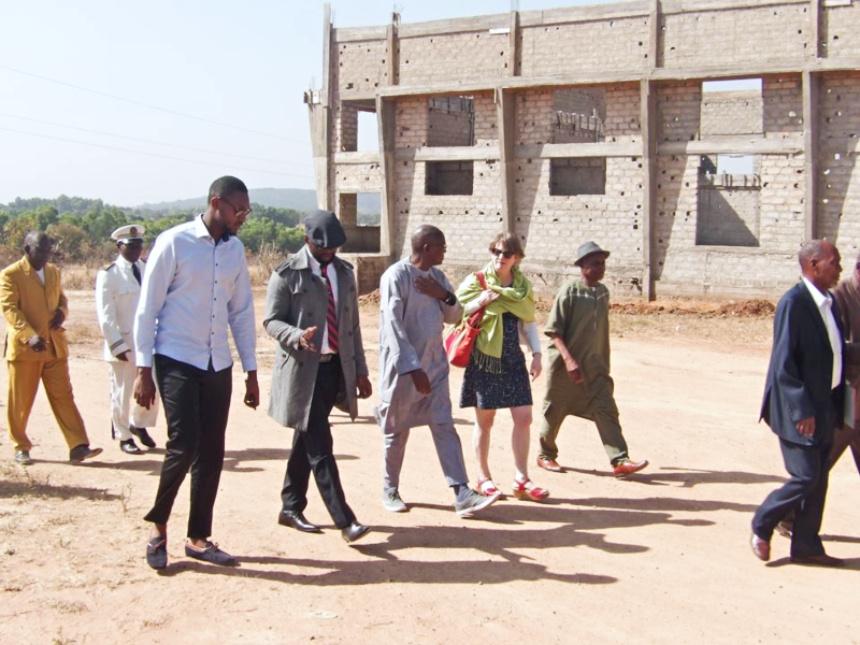 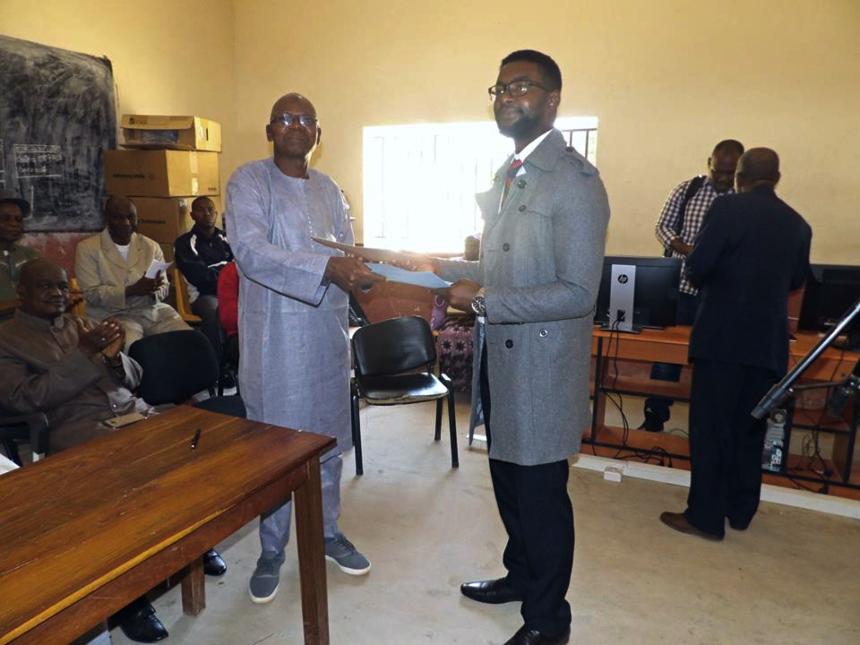 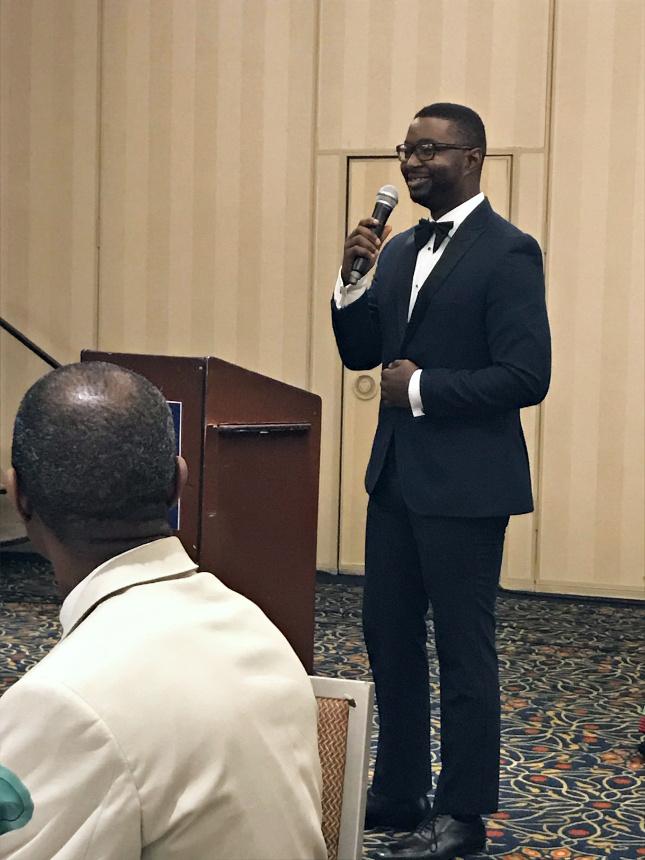