After Matt Cahill’s cousin, an Army veteran who had served time in Afghanistan, died by suicide in March, he had trouble finding the words to characterize his family’s loss, sacrifice, and enduring pain.

Families of soldiers killed in battle are classified as Gold Star families, a designation of honor and respect that also qualifies survivors for government financial benefits. As Cahill, a master of social work student earning his Widener degree remotely, learned how the Gold Star program came to be during his Social & Economic Justice class this spring, he became intrigued. And he began to think about his own family.

His cousin’s death by suicide didn’t qualify for Gold Star designation, but that didn’t mean the loss hurt any less. Cahill thought about the rising rates of veteran suicide in the United States – and let the class taught by Jenifer Norton, director of Widener’s online MSW program, inspire him.

“I had this idea that we should approach the government,” said Cahill, himself a retired veteran with 26 years of service in the Army and the Pennsylvania National Guard, who once served in Iraq.

An estimated 16 veterans die by suicide daily, according to statistics from the Office of Mental Health and Suicide Prevention at the U.S. Department of Veterans Affairs. That amounted to 6,139 in all of 2017, the most recent statistics available from the VA.

“There’s just too many of them quite honestly. Someone from somewhere needs to help,” Cahill said.

So he devised a plan to designate the survivors of veterans lost to suicide as Green Star families. Using the kelly green hue often associated with mental health awareness ribbons, he got to work from his home in Swedesboro, New Jersey.

Cahill approached New Jersey Congressman Jeff Van Drew, and worked with his office this summer on drafting a bill that would create a national Green Star family designation. He also sought advice and partnership from advocates in the veteran community, including the Veterans of Foreign Wars, who suggested he found a nonprofit organization to support and advance his cause.

“I wasn’t expecting to have to do a whole nonprofit,” he said.

But now he is.

He’s been working to develop a website and messaging, assembling a board of directors, and managing all the logistics of getting an organization off the ground. The bill, meanwhile, will need approval from the House of Representatives and U.S. Senate, and signature by the president. It has not yet been filed.

If it succeeds, the nonprofit would be in place to continue advocating for Green Star families as circumstances with veteran suicide evolve over time. Cahill said he’d like to see a Green Star designation come with a benefit that provides mental health counseling for the families, who struggle with the unique pain that accompanies losing a loved one to suicide. He’s thinking about ways to provide financial assistance too, but approaching that with caution to avoid it becoming a reason for veterans to consider suicide.

Norton, meanwhile has been an enthusiastic supporter. She has reviewed Cahill’s materials and continues to encourage him. His determination illustrates the leadership caliber of a Widener social work student, and she is proud that her class helped motivate Cahill to act.

“The whole thing is a beautiful example of a student doing amazing work in his community, and the transformative power of education,” she said.

Green Star families is the second effort Cahill has undertaken for veterans and their loved ones. He founded VETS, or Veteran Equine Therapy Specialists, in January 2019. That program uses the therapeutic power of horses to help veterans begin recovering from trauma and find a path to healthy living.

Cahill knows his efforts to help other veterans will be aided by his decision to pursue a master’s degree in social work at Widener. For him, the career is more of a calling.

“It has more than blown me out of the water with how much I love it,” Cahill said of his studies, and career choice. “How many different directions I can go with this degree is amazing. There is so much I can do with it in the future.” 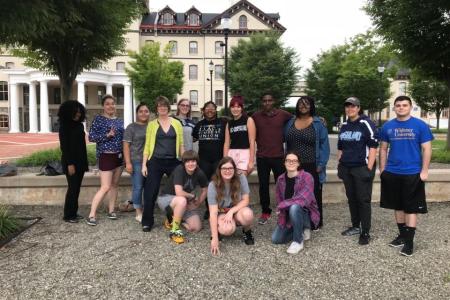