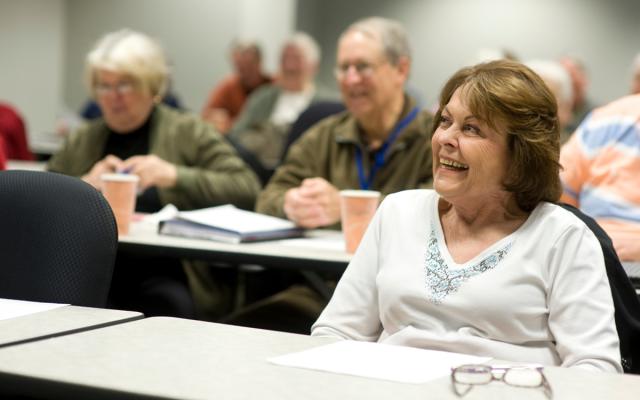 Experience the joy of learning from those who find joy in teaching.

OLLI is a lifelong learning institute for adults ages 50+ that offers opportunities for intellectual development, cultural stimulation, and social interaction. We celebrate the insatiable curiosity of older adults and their ongoing quest to learn about, engage with, and contribute to the world around them. At OLLI at Widener, we never stop learning!

OLLI operates on a three-semester system, meaning you can take courses during the fall, spring, and summer. Classes are typically offered at our Main Campus in Chester, or at off-site locations in Chester and Delaware county. No matter what courses you take, you'll experience an environment that cultivates creativity and critical thinking.

In accordance with Widener University policies, anyone participating in OLLI must provide proof of Covid-19 vaccination.

As an OLLI member, you will belong to an exclusive and vibrant learning community — a community of peers who have discovered the joy and thrill of lifelong learning fused with social enrichment. Our noncredit classes offer intellectual stimulation and a forum for friendship and socialization.

The Spring 2022 fee for new members is $20. Those who joined OLLI in Fall 2021 do not pay a membership fee for Spring 2022.
Course fees range from $21 to $50, depending on the length and content of the course. Please consult the Course Listings for additional details.
Membership fees are non-refundable. Course fees will only be refunded if a class is cancelled.

The Spring 2022 semester is comprised of two 5-week sessions, with a 1-week break in between.

Registration is now open! To register, complete our online registration form and follow the prompts to pay via credit card on our secure website.

We encourage you to register early! Some courses have limited seats, and spots are available on a first come, first served basis.

Ways to Engage with OLLI

Comedy is the earliest and most durable of film genres. Although not everyone will agree on what is funny, these films will surely generate a few laughs to leaven these serious times. A new film will be presented and discussed each week. Members may choose to enroll in Session A, Session B, or both.

This course will explore the history of Broadway. It will feature actors and directors sharing personal stories of their theatre experiences, with lots of vignettes and fascinating tales. Films of plays and musicals will be shown and discussed.

Can music make a city? In Louisville, KY, the mayor and the symphony director asked this question. The city had suffered a major flood in 1937 and was still recovering ten years later. Their idea was to pay composers to write new music, record the orchestra playing this music, then sell records. They hoped this would pay for the operation and enhance the city’s image. It worked! From 1947 until 1992, the orchestra released on its own label 170 records of 450 new compositions by living composers. This course will use a PBS movie, interviews with composers and musicians, and samples of the music to tell this story.

This photography course will introduce different ways to use digital technology to move beyond the snapshot and produce more effective photos. Students will learn photographic composition while advancing technical skills in areas of camera functions, lighting, and post-processing. A digital camera or smartphone can be used.

Explore some of the great playwrights in American theatre, and participate in engaging discussions about the best contemporary stage performances. Plays will be presented in the context of their original presentations, as well as legacy. Specific scenes will be viewed on video.

For millions of years, humans have been watching and copying bird behavior. Many of the behaviors that we take to be inherently human - walking upright, using tools, language, writing, music, dance, sewing, pottery, home building, and flight - were perfected by birds long before we became human. This course looks at the shared history of humans and birds, and how we became human by copying these behaviors from birds in our shared environment.

Learn the centering beauty of T’ai Chi Chih, a soft, flowing, moving meditation practiced by thousands of people worldwide. It’s easy to learn and brings many benefits, including peace of mind, improved health, and joy. It requires no particular level of fitness, no special equipment or clothing, and may be done while seated. New participants are welcome.

In 1682, John Simcock purchased 2,875 acres of land from William Penn and named the area Ridley after his hometown in England. Local historian Keith Lochhart presents a two-part illustrated history of Ridley Township. For nearly 45 years, Keith has accumulated historical photographs of Delaware County which he will share in the final session.

A nostalgic look at the objects and stories that filled our lives when we were young, and the political, social, and technological forces that replaced them. This course will also cover the events that grabbed our attention during this important, yet often overlooked decade. A new topic will be presented and discussed each week. Members may choose to enroll in Session A, Session B, or both.

Each week, students will explore a variety of diverse topics on American colonial life through the eyes of Revolutionary War hero Edward “Ned” Hector, as portrayed by historical interpreter Noah Lewis. Topics include colonial customs, teamstering, weapons and firearms, notable Black colonial figures, and George Washington and the slave soldiers.

This course is a continuation of our study on women who have served as First Lady of the United States. We will learn about Presidential wives who occupied the role while their husbands were Chief Executive, as well as Presidential spouses who passed away before their husbands were elected. Additionally, students will hear about women who served as White House Hostess during the absence or incapacity of the First Lady. It is not necessary to have taken Part I in order to enroll in America’s First Ladies: Part II.

This course will focus on the similarities and differences among four religions – Judaism, Christianity, Islam, and Baha’i – and how they came into existence. The symbolic signs of each religion will also be compared and discussed.

Much attention has recently been given to Americans who lived through WW2. Known by many as the “Greatest Generation,” they displayed a sense of national unity and purpose that is rarely seen in contemporary American society. By reviewing a series of newspaper front pages, photographs of homeland activities, and memorabilia of the war years, students will get a sense of the way things were during that era. Participants will be invited to consider what has changed since then, and why our society is far more fractious and divisive today. A review of newspaper clippings will also show that, while some things have changed greatly, others were the same then and now – Blondie and Dagwood were in the comics and the Phillies were disappointing their fans!

This course will explore the ancient civilizations of the Persian and Ottoman Empires. The Persian Empire (559 B.C.E. to 331 B.C.E.) encompassed an area of modern-day Iran, Egypt, Turkey, and parts of Afghanistan and Pakistan. The Ottoman Empire controlled much of Southeastern Europe, Western Asia, and Northern Africa between the early 14th and 20th centuries.

Held regularly on Thursday afternoons at 1:00pm, the OLLI Seminar Series is just one of many membership benefits.

February 24 | Gerry Mansell
The Tomb of the Unknown Soldier: A Sentinel's Perspective

March 17 | Pamela Dimeler
The Beauty of the Celtic Harp

April 28 | Skip Shuda
What is Shamanism?

Thanks to the generosity of friends, neighbors, and current members, OLLI can make powerful programming and compelling courses available to hundreds of lifelong learners. These supporters ensure that adults in nearby communities never stop learning. Will you join them? Find out how your gift will extend OLLI offerings for years to come.
Make Your Gift

Questions about the Osher Lifelong Learning Institute? We're glad to connect with you.