As vital as it is to understand the events of the past to dream of and work toward a better future, sometimes history can feel remote or inaccessible. Sometimes, we just don’t know how to see the history right in front of us.

M’Nya Preston, a junior anthropology major, and Madison Smith, a sophomore history major, want to change that. They’re bringing history to life on Widener’s main campus by building a walking tour through sites significant to the civil rights movement of the 1960s.

Preston and Smith met in Dr. Jordan Smith’s Practices in Public History: History and Memory in Chester course in fall 2020. After completing a project on the 1964 civil rights protests in Chester, they decided to continue their research.

Through the Summer Undergraduate Research and Creative Activities (SURCA) program, Smith and Preston dug deeper into the rich civil rights history of Chester and learned about many important sites and figures tied directly to Widener’s campus.

While Preston and Smith have spent countless hours in Wolfgram Memorial Library working their way through the extensive archives, they’ve also spent a lot of time interviewing Chester residents and reading stories on a Chester community Facebook page. Dr. Smith praises the fact that Smith and Preston “recognize the vitality of interpreting and narrating Chester’s history with input from Chester residents and stakeholders.”

“When you have living people who experienced an event, it’s a lot easier to form some type of connection to the history,” Preston said.

“This isn’t the typical history book or archival material research that people often think about when diving into history,” Smith added.

The result of this research will be a QR-code walking tour featuring scannable plaques at various campus sites. Once scanned, the code will open a YouTube video diving into the significance of the site through historical documents, video clips, audio interviews, and voice reenactments of first-person accounts of the Chester protests. Eventually, Preston and Smith hope to create an augmented-reality version of the walking tour to really put users in the action of the era.

Making the Past Personal

For Preston, this history is still vibrantly alive in her family today.

“The majority of my family were born and raised in Chester, and so I often talk to my grandmother, great aunts, and other family about this project,” she said. “We think it’s so cool that my family can tell me about the places we’re learning about as part of this project.”

For Smith, who plans to go on to law school, she hopes to share the whole story of the civil rights movement in Chester with everyone in the Widener community.

“There is no formal obligation for students to learn about the community they are going to school in, but I think there should be a moral obligation for them to do so. This project is a great way to make history accessible,” she said.

Dr. Smith, who received a grant through Project Pericles to incorporate civic engagement into his curriculum, says he hopes the project will empower Chester residents and the Widener community alike to work toward building a more equitable future.

“I don’t think any public history project can, in and of itself, repair what has often been a stressed relationship between Chester and Widener,” he said. “But the goal of this tour is to think of the histories of the university and the city as intertwined.

“We are telling a story that has never before been told in this way through a medium that will hopefully engage the largest possible audience.”

Smith and Preston both say they can see parallels between the civil rights protests in Chester in 1964 and modern-day protests for racial justice. Less than two years after protests over the killings of George Floyd, Breonna Taylor, and others rocked Black Lives Matter back into national headlines, the students say sharing this history is more important than ever.

“Madi and I found ourselves getting slightly emotional talking about the lack of progress that has been made since 1964,” Preston said. “It’s disheartening to see that this happened historically, and our people today are still fighting for the same things.”

When the plaques with QR codes are placed in the spring of 2022, Preston and Smith will kick off the walking tour with an official event. They hope everyone coming to campus will take the time to explore the meaningful people and places behind the 1960s Chester civil rights movement.

Smith says this view of history is complicated, but there’s room for both grief and optimism in this story.

“I want people to know that the City of Chester has amazing people and amazing stories, but also sometimes really dark history that needs to be brought to light.” 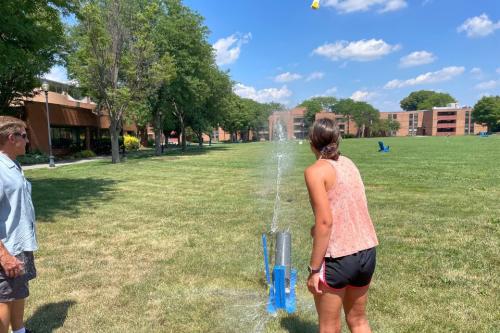