It’s easy to say you care, but at Widener, employees who make the university feel like a second family show that with their actions, too. Across the campus, students find warm and friendly faces who brighten their days and go the extra mile to make them feel at home.

Meet some of the all-star members of our Widener family who lead with their hearts.

Senior computer science major Matthew Savela met John Shamburger when he walked into the Pride Café as a freshman and Shamburger – known affectionately by students as “John the Omelet Guy” – was behind the grill. Savela would quickly learn that Shamburger has a knack for memorizing student orders.

“I love that guy!” Savela said. “After he sees your face a few times, he puts the omelet down on the grill as soon as he sees you walk in. I’d wait in line forever for his omelets. They are great.”

Shamburger has worked in the café 18 years and by his calculations has made 230,000 omelets. He’s there every morning, Monday through Friday with a smile and a friendly word to pass the minutes while the eggs cook. A group of ROTC cadet breakfast regulars gave him a thank-you card this year for caring so much, and the Student Government Association put him on their T-shirt a few years back when they assembled a list of uniquely Widener things and people.

“It’s the closeness and the relationship I’ve built with them,” Shamburger says, reflecting on why he didn’t retire as planned 10 years ago. “It’s like a family when the students come through.”

“The Mayor of Freedom Hall"

Rows of faces look out at students from a second-floor wall of Freedom Hall, where the assembled head shots identify full-time faculty members and adjunct instructors who teach for the Communications Studies department. And nestled proudly among them is also a head shot of Stan Price, a former U.S. Navy radioman whose housekeeping position at the university has him in charge of keeping Freedom Hall clean.

The unofficial mayor title under his name is no exaggeration. Students who’ve encountered Price and developed a friendship with him are passionate about explaining what makes him special.

Vergis and fellow sophomore nursing major Alexis McClure missed the first half of their freshman year on campus because of COVID-19, and they felt a little out of sorts when they arrived. They took to studying in Freedom Hall.

“He totally went out of his way to make us feel welcome,” McClure said. “He would do anything for you.”

Price buys and brings in candy and other treats to fill bowls in a student seating area of Freedom.

Occasionally, he’ll buy pizza for the students. On a hot day last year, McClure and Vergis remembered him bringing them popsicles as they studied in the sunshine on Memorial Field. They bought him a Widener hat at the end of their freshman year to say thanks for his kindness, and they keep a group selfie taken with him on their phones.

“It’s way more than where we keep the books."

Kristina Dorsett is a research and instruction librarian, the liaison to health sciences programs and the Wolfgram Memorial Library’s outreach coordinator. She’s also an employee who champions fun and creative ways to give hard-working students a break. The library, she says is as much about studying as it is a place to be present, be yourself, and not have to spend money on comforts.

Dorsett set up a mindfulness table on the library main floor, with puzzles, crayons, markers, coloring pages and books, and space for people to just sit down and chill. There’s a bulletin board where students can tack up their finished artwork. Sometimes, she’ll join students and color, too.

“Everyone has come together and really loved it,” said Dorsett, whose purple-highlighted hair is as cheerful as her personality. “Taking a break at the mindfulness table gives your brain time to absorb all the information you’ve gained from studying.”

Dorsett's former colleague Susan Tsiouris also had an idea to hide rubber ducks around the library. The ducks are tagged, so if you find one you can turn it in for a prize like a pen, eraser, candy, bookmark, “classic library stuff,” she said.

“We do little things like that so students, who are here four and five hours at a time are encouraged to take a break,” Dorsett said.

Accelerated nursing students Ianna Checo, Siani Jackson and Haley Nelson all took advantage of the mindfulness table recently, and spent a brief study break coloring. Dorsett had a table of snacks available nearby.

“It’s easy to get caught up in the stress. It’s nice to take a step back, and breathe, and recharge,” Nelson said.

If Widener had a welcome wagon, Norman Mitchell would be at the helm. Prospective students who arrive by car usually get to meet Mitchell – a member of Widener’s Campus Safety team – who is stationed at the security booth along the circular drive between Muller Hall and Old Main. He waves in regulars headed to Old Main parking each morning and is the first point of contact for prospective students and their families as they arrive.

While Mitchell works for Campus Safety, he’s a bit of an ambassador for admissions.

An octogenarian who relishes his interactions with campus newcomers, students and employees as they pass the security booth, he said he likes the way the job keeps him moving and mixing with people.

“You have to know people,” he said. “You’ve got to be remembered for something!”

Mitchell made a huge impression on a family who visited for a tour recently, when he helped them park, directed them where to find rest rooms and the start of their tour, and insisted they relax and enjoy their visit.

"No stress! There's no stress about any of this today." That’s what the prospective student’s mother remembered Mitchell saying, putting them at ease. Later, she was moved to write to Widener.

“As a mom sending her second kid off to school, I'm looking for these types of people,” she wrote, adding if her son chooses Widener, “I know he will have that man as a connection - a smile on a hectic day, a ‘great job’ after a project is completed, a ‘no stress’ as he adjusts to school. Please don't get me wrong - the

academics are fantastic, the entire campus community is just what he's looking for, but you have someone who is often a first touch point who reminds us that every person you encounter is important, and that, with the right support, there's ‘no stress.’”

Mitchell shakes off the praise. 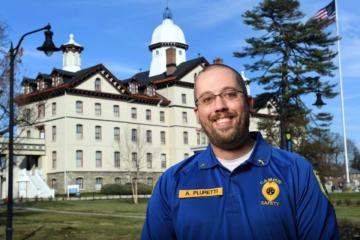