Widener students have a history of being politically engaged and active citizens, especially when it comes to voter turnout. According to data collected by The National Study of Learning, Voting, and Engagement, overall voter registration among Widener students was 88% for the 2020 Presidential Election, with an ultimate voter turnout rate in the same year being 78%.

In addition to past data, Widener was recently included in Washington Monthly’s 2022 list of America’s Best Colleges for Student Voting and ALL IN's list of Most Engaged Campuses for College Student Voting.

According to Jim Vike, professor of political science, the push for student political involvement has been a multi-pronged approach that has been implemented across campus for a few years. By emphasizing the importance of being an engaged citizen, expression of political voice and preferences, and the impact of electoral and policy outcomes, Vike feels that students from across the university gain a better understanding on what it means to be politically engaged.

“It’s often students who are from majors that are not political science saying that they don’t understand politics,” Vike said. “We help them recognize connections to the political world within their own fields and majors, and in their personal lives as well.” 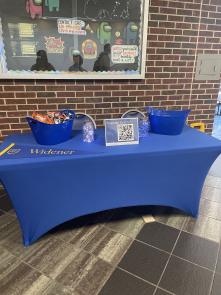 Some students already have a political interest when they come to Widener. For Taylor Easter ’25, her interest in government and politics began in childhood and has only grown since then.

“When I was younger, my mom got me a book of all the presidents and I used to have that memorized,” Easter said. “When I was a freshman [in high school] I took my first civics class and that was the first time I realized that you could be interested in politics and engaged in ways besides voting.”

Easter, a double major in political science and sociology, currently serves as the political engagement coordinator for Widener’s Center for Civic and Global Engagement. After joining the Center in her freshman year, she hit the ground running on creating voting interest across campus.

“We did some tabling and I created content for our social media pages just focusing on the gubernatorial elections in Pennsylvania and New Jersey at the time. This year I’ve been working on trying to expand as we head into the midterms.”

Looking forward to voting in the upcoming midterm election is Dimple Gandevia ’23 ’24. The robotics engineering major recently passed the United States Citizenship Test and was sworn in as a citizen.

Having come to the U.S. from India with her family seven years ago, Gandevia has been waiting for her citizenship since she applied in 2019. In high school, Gandevia volunteered at a polling place and was excited to see how many people turned out to vote. Now that everything is official, she plans to use her right to vote as soon as possible.

“I registered to vote a couple of days after I took my oath. I’m interested in having a say, and I like having an opinion on what goes on around me.” Gandevia said.

Both Easter and Vike emphasize the importance of getting involved in politics not just at the national level, but at the state and local level too.

“We tend to think national,” said Vike. “Students might get involved in national campaigns, but I encourage them to start local. Being attentive, reading up on local issues, keeping up with an issue you like, those are all types of things that can help draw you in and help you gain a lifetime understanding.”

Easter says that a good place to start is by visiting their state legislative websites to learn what district they live in and who represents that district.

“Politics impacts us whether we realize it or not. A lot of people our age see politics as big and confusing, and it definitely can be, but on a local scale we are affected by the decisions that our politicians make, and I think it’s really important that we all know what that means for us and the people in our communities.” Said Easter. Guided by the ethos “We’re All Widener,” the university explores the legacy of Martin Luther King Jr. on this national holiday and echoes his commitment to a more just world through our actions and programs.