The Parade Must Go On

There, in the studio, they learned the ropes of video, broadcasting, and digital media, and formed invaluable connections with fellow students and faculty members.

A couple of years after graduation, Roman and McGinnis renewed their professional partnership by forming Digital Drop, a media and marketing agency specializing in helping small companies and nonprofit organizations.

But Digital Drop recently took on a pretty big client, the Philadelphia Veterans Parade, helping to keep the annual tradition going with a virtual show. 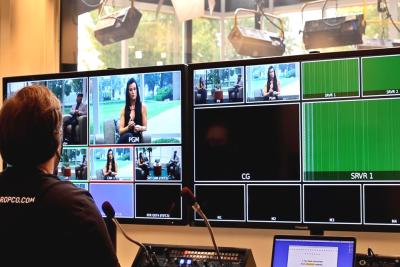 And fellow Widener alumni, current students, and even campus facilities helped Roman and McGinnis pull it all together.

Due to the pandemic, the city’s Veterans Day parade moved to a virtual format on Nov. 8. A 30-minute program was broadcast on 6ABC, but the bulk of the celebration was streamed on Facebook Live.

That’s where Digital Drop came in. Roman and McGinnis were tasked with producing the Facebook Live content – a pre-parade kickoff and the Veterans Festival. They compiled videos of pre-recorded interviews and messages spotlighting veterans, veteran service organizations, resources, and performances.

“We put it all together to make it an actual show,” said McGinnis.

Fellow Widener graduate Katey Colt ’17, an event planner with All About Events in Philadelphia, had approached Digital Drop with the project. Roman and McGinnis realized they needed a studio to bring it to life. That’s when they remembered the time spent in Freedom Hall.

“It was literally like a lightbulb going off,” said Roman.

And Widener, with its beginnings as a military college, presented the perfect backdrop for the project.

Roman and McGinnis reached out to their mentor, Communication Studies Chair and Associate Professor Angie Corbo. Working with the university and complying with its COVID health and safety guidelines, they were given access to Freedom Hall to record interviews with Veterans Festival hosts Anthony Murphy, president of the Philadelphia Veterans Parade, and Erica Webster, chief executive officer of Dub Fitness.

Roman and McGinnis used the Widener studio and equipment to edit and create the finished product, and to facilitate the Facebook Live stream.

“Everyone at Widener has been so welcoming and flexible and really generous. It’s been like jumping back in time,” said Roman.

But that’s not where the Widener connections on this project end. Roman and McGinnis needed highly skilled assistance on editing, graphic design, and production work. They turned to fellow communication studies alumni Andrew Proctor ’19 and Erin O’Kane ’20, and current seniors Lindsey Cooper and Carly Dunbar.

Cooper called the project an amazing professional experience, and even got to learn something new on the job – motion graphics.

“Hunter and Anna were so encouraging and helpful the whole time,” said Cooper. “I really admire them for giving back to the Widener community. They understand how difficult it can be to get experience as a student and I couldn’t be more grateful for this opportunity.”

The Veterans Festival also incorporated a video message from Widener President Julie E. Wollman saluting the school’s Pennsylvania Military College history and its continued legacy of leadership and service, including through the ROTC program.

Working with Widener alumni is nothing new for Roman and McGinnis. Digital Drop employs a number of Widener graduates and students as freelancers, helping the latter gain hands-on field experience.

This is our way of giving back to Widener and the people we grew with. We’re where we are now because of relationships grown at Widener and on. Now we can give back (to the next generation) in terms of experience and knowledge. — Anna Roman '16

Both Roman and McGinnis say their time at Widener helped them hone the skills needed to run their own company and to create projects like the virtual Veterans Parade show.

“The biggest takeaways from Widener were the class sizes. With smaller class sizes we connected so well with professors,” said McGinnis. “And the availability of the equipment and the studio – we spent plenty of all-nighters in that building getting projects done, helping each other, and of course, networking.” Gottahava Wawa… in Your Business Class

This semester, Wawa is embedded as a case study in an introductory management course, with company executives, including Widener alumni, speaking to students and offering advice. It’s just one of several connections between the university and the convenience store chain. Join WidenerCONNECT, a Powerful New Networking Platform on the Widener Inside Track

Introducing WidenerCONNECT, the university's new, official, social and professional networking platform for both alumni and students. In the current economic climate, many people are turning to graduate school as a way to succeed in a rapidly changing world.