Widener’s energetic campus community has been a central component of the university’s 200-year-long history. Today, students are invited to participate in more than 80 clubs and organizations whose membership gives them opportunities to not only engage in their interests, but also to forge friendships, build skills, and develop professional networks.

As the university has transitioned through the years, clubs and organizations have evolved to reflect student needs and interests. Changes made in organizations like Fraternity and Sorority Life have demonstrated Widener’s dedication to student growth and success, both in and out of the classroom.

“We’re committed to having a vibrant full-bodied, out-of-class experience for our students, and that includes fraternities and sororities,” said John Downey, dean of students.

Under the leadership of Downey; Phil Gatling, director of Fraternity and Sorority Life (FSL); and Austin Duckett from the Office of Student Engagement, the university has kickstarted renewed investments in Greek letter organizations.

Since its establishment after the end of the Second World War, Widener’s FSL program has grown to represent nearly 500 students, or approximately 19 percent of the undergraduate population. Led by four councils—the Interfraternity Council, College Panhellenic Council, the recently renamed National Pan-Hellenic Council, and the newly established Council of Independent Organizations—FSL delivers a blended dose of Widener’s institutional values alongside chapter principles to create an enriching student experience.

“When a student joins a fraternity or sorority, they dramatically increase their likelihood that they will remain at the university, will be more satisfied, and will be more successful both in and out of the classroom,” said Downey.

Recent renovations showcase concerted efforts by the university and FSL organizations to build a partnership, develop robust student experiences, and deepen alumni connections. While acknowledging the difficulties of the past, Downey, Gatling, and other university leaders underscore the importance of communication and providing the chapters with tools and resources they need to expand and thrive.

We’re pushing them to grow and to have a larger impact on campus. We’re building them up. It’s a new day for fraternity and sorority life.” — John Downey, dean of students

“We finally feel the love,” said Schaefer. “Coming back and pushing all of that history to the side and looking to the future, it’s great.”

Institutional support is evident to current student leaders like Willie Mathis III as well. The senior civil engineering major and member of Kappa Sigma joined FSL during his freshman year. Now as president of the Interfraternity Council, Mathis is energized by the demonstrated support.

“I’ve seen a difference in leadership change, not just in our chapter’s executive board, but in the university leadership. They started taking a more proactive approach to FSL, particularly financially and in promoting recognition on campus,” said Mathis.

Expansion in an Unlikely Circumstance

When COVID-19 led the university into remote learning and operations, FSL leaders had to find creative ways to stay connected and engaged with one another. Mathis and other student leaders were quick to transition critical events, such as recruitment and educational workshops, online.

“We had to do full virtual recruitment. It definitely was a big switch and a little tough,” said Mathis, who was the Interfraternity Council’s vice president of membership recruitment in 2020.

Despite the setback, membership grew across the FSL program—a testament to the students’ perseverance, according to Downey.

“I’m amazed at how the students have been able to recruit and maintain members of the fraternities and sororities despite the circumstances,” Downey said. “They showed great resilience.”

In addition to growing membership, the program began shifting its focus to welcome new organizations, including more academic and racially and ethnically diverse groups. Briana Dilger is president of the Council of Independent Organizations (CIO), which governs fraternities and sororities that don’t fall under the traditional purview of social chapters.

The senior nursing student aims at building awareness of the council’s six organizations, which include a gender-inclusive honors fraternity, a professional sorority for women in engineering, and a co-ed service fraternity.

When people think of fraternity and sorority life I don’t want them to only think of the traditional social route, because there are so many different routes and ways to get involved with FSL.” — Briana Dilger '22

Program changes, such as the creation of CIO and the renamed National Pan-Hellenic Council, underscore ongoing efforts to not only expand Greek letter organizations, but better reflect student engagement and the greater campus community.

“These changes show the university that we’re growing in a diverse way,” said Gatling, adding that expansion efforts are continuing as the program works to bring new fraternities, specifically a historically black fraternity, to campus.

The Next Chapter of FSL

As the future of Widener’s FSL program continues to take formation, alumni are playing an active role to preserve the transformative opportunities that they experienced for next generations.

I credit the university for helping to shape me and for giving me the encouragement, the inspiration, and the tools to be successful once I graduated.” — David Almacy ‘92.

That hands-on mentorship and support is what drives Almacy to remain engaged with Widener and its fraternities and sororities.

“The idea is to give back to that, to make sure that Widener as an institution is successful,” said Almacy.

Almacy is part of the Phi Delta Theta alumni network partnering with Widener to launch the 511 Fund, a fundraising initiative to provide housing expenses for chapter brothers who wish to live in the fraternity’s on-campus residence, now located at 511 E. 13th Street.

We have brothers from all walks of life, and I think one of the most beautiful things about this project is that we’re able to provide access for students to live in the fraternity without having to worry about the burden of cost.” — Patton Vo ’15, a brother of Phi Delta Theta.

That sense of pride and desire to give back has deep roots in the alumni community, particularly those associated with Greek letter organizations. According to Sean Wagner ’02, executive vice president and CEO of the Phi Delta Theta International Fraternity, he envisions that alumni-led efforts such as the 511 Fund can jumpstart engagement among other graduates to support future fraternity and sorority members.

“My hope is that this can be a model that Widener can use to take to others who had such tremendous experiences and support the university through opportunities to champion students today that are a part of the Greek community,” said Wagner. 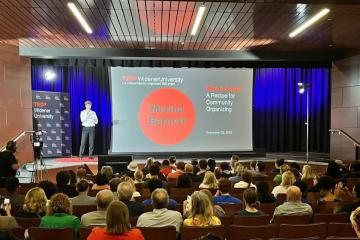