Reframing Conversations on Criminal Justice By Stepping Inside Prison Classrooms

Thirty students – half in navy medical scrubs and the other half in maroon prison garb – file into a classroom each Wednesday. They alternate seats in a circle, and for the next two hours the conversation flows from warm greetings to deep discussion on social justice and the possibility for change.

The Widener University class – taught a mile from campus, behind the barbed-wire fence of Chester State Correctional Institution – would seem to be the antithesis of freedom.

Yet, both the Widener ‘outside’ students and the prison ‘inside’ students say they feel freer than anywhere else they’ve been before.

They engage in authentic conversation, fully present, without phones or other distractions. I’m reminded each class just how powerful it is to acknowledge a person and their humanity.” – Brenda Kucirka, assistant professor of nursing who teaches the course

The semester-long course is part of the Inside-Out Prison Exchange Program, an international initiative started in 1997 by a Temple University professor that has grown to involve more than 150 colleges and universities across the United States and around the world. The program bridges together two powerful institutions – higher education and corrections – in hopes of making both more humane and just.

Over the last two decades, several Widener faculty have taught the courses in the medium-security men’s prison, leaving a lasting impact on hundreds of Widener alumni and the way they view the criminal justice system and broader social justice issues.

“Education is transformational, both for the men incarcerated at SCI-Chester and for our students here at Widener,” said President Julie E. Wollman, a strong supporter of and regular participant in Inside-Out and other prison programs. “A key component of education is breaking down assumptions and showing compassion for people who are different from yourself.”

The Inside-Out program is one of many ways that Widener faculty, students, and alumni from a range of disciplines are confronting injustices in the U.S. criminal justice system, which notoriously houses the largest prison population in the world.

Tough-on-crime laws adopted in the 1980s caused the prison population in the United States to swell with mostly nonviolent offenders. In 2016, 2.2 million Americans were incarcerated (meaning for every 100,000 people in the population, 655 were inmates).

However, in recent years, a national movement to reduce the number of prisoners and the length of sentences has resulted in slight declines. For example, Pennsylvania recently passed a criminal justice reform act aimed at no longer sending nonviolent offenders to prison for parole violations and other misdemeanor offenses.

For alumni like Ariel Diehl, a 2019 nursing graduate, the Inside-Out program has made her a staunch advocate for underrepresented groups – whether she is in a voting booth, attending meetings to learn about Delaware County re-entry services, or supporting her patients at Delaware County Memorial Hospital.

“The class fueled my motivation to support prison reformation in this country,” Diehl said. “Now that I have that basis, I want to be more active in society, whether that is locally or nationally, because I am fighting for my friends, for the men at SCI-Chester who I really care about.”

Psychology Professor Kathryn Healey has taught Inside-Out courses since the program’s inception. As an active licensed psychologist, she has seen the debilitating impact post-traumatic stress disorder can have on people – in and outside prison.

Last summer, Healey built an interdisciplinary coalition of faculty and students who worked with men in SCI-Chester to research the concept of post-traumatic growth and create a psychoeducational curriculum.

“Post-traumatic growth is this powerful notion that you can’t get back to where you were before the trauma, but you can get to a higher level,” she said. “You can build out of ashes a healthier, stronger you.”

This fall, five students – along with Healey, Kucirka, Wollman, and Assistant Teaching Professor of English Jayne Thompson – taught the curriculum at evening workshops in the prison. They plan to refine the curriculum and continue teaching next year.

They also presented their experiences with Wollman at the International Conference of Education, Research and Innovation in Seville, Spain, in November. They hope other prisons will begin using their curriculum for trauma education.

Sunni Tarver, who graduated in December with a psychology degree, had never visited a prison before the workshops. She was hesitant at first, but now she is connecting with the men inside.

“The prison system needs to look at their rehabilitation in the light of acknowledging trauma,” Tarver said. “We will be better off if we realize that we all have stories, and those stories matter to our future.”

In a similar workshop through the Inside-Out program, the Widener students and incarcerated men sat facing each other as they asked icebreaker questions.

Natalie Weaver, a psychology major who graduated in December, asked: ‘If you could be any animal, what would you be?’

An inmate responded, ‘a turtle.’

As Weaver pondered his response, he added: ‘You know, the kind of turtle that lives 200 years. Think about the impact I could have with that much time!”

The exchange reminded her of one simple, yet incredible, fact. “As much as they learn from us, we learn even more from them,” Weaver said.

The Theme of Hope

As part of the post-traumatic growth workshops, Thompson is leading the group in writing prompts aimed at using self-expression to heal and grow. She has taught similar writing workshops in prisons and juvenile detention centers for the last decade.

In 2014, Thompson and alumna Emily DeFreitas '15 compiled and edited the writings of incarcerated men into Letters to My Younger Self: An Anthology of Writings by Incarcerated Men at S.C.I. Graterford and a Writing Workbook.

Four years later, Bill Richards '99, a literature teacher at the Mid-Atlantic Youth Services, reached out to Thompson regarding the book.

“As an English teacher,” the alumnus wrote to Thompson, “I had dreams about teaching Faulkner, Hemingway, Byron, but what I found was the kids couldn't relate to it.”

Instead, he offered his students Letters to My Younger Self. They immediately connected and found the inspiration to write their own letters. One student wrote, “I wonder if people think I am a criminal, but I am not. I am just a person who made a mistake.”

Thompson and Widener students visited Richards’s class last spring, and during the visit, one student raised his hand and eagerly asked if Thompson could make a book with their writings.

Now, she plans to do just that.

“Hope is a constant theme of the discussions and writing of my incarcerated students, and I see this theme as a possible focus for a new anthology of writings by incarcerated individuals,” Thompson said.

The Challenges of Re-Entry

That sense of hope is profound, whether a person is serving a life sentence or days away from release. In recent years, research has focused more and more on the latter category – the men and women being released.

Prisoner re-entry is a huge issue because we rarely hold people for life. Society needs to figure out a way to welcome them back and help them be productive.” – Lauren Shermer, associate professor and chair of the criminal justice department

But, Shermer acknowledges the challenges to successful re-entry are significant.

Imagine being released from prison with no money or identification, no high school or college diploma, no home or family support, no job or transportation. In addition, the system often lacks the mental health and substance abuse support that is desperately needed.

Senior criminal justice majors in Shermer’s capstone course are witnessing this re-entry reality first hand by spending the semester advocating for three organizations – the Pennsylvania Prison Society, the Institute for Community Justice, and Project New Start, which is located on the campus of Widener University Delaware Law School.

This fall, her students underwent a two-hour simulation at Project New Start that put them in the position of an individual two weeks out of prison. They navigated the challenges of re-entry and negotiated their way through limited services.

“In one simulation, we had many participants, and by the end, most were back in prison,” Shermer said. “It was pretty eye-opening, even for someone like me who studies this field.”

‘We can’t let one instance define a person’

The hope of the university faculty and administrators is that students will learn to lead on social justice issues and will confront biases and injustices in any career path they choose. 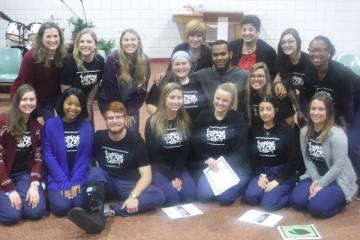 He felt compelled to take the Inside-Out class last year. He knew that as an African American man, he would see many men who looked like him. He bonded with one incarcerated man in particular.

“He said he saw a lot of himself in me,” McFarland recalled. “He really encouraged me, and I will always hold that in my heart.”

Now, as he completes a residency program at Hospital of the University of Pennsylvania, he tries to be an ally for his patients who come from underrepresented groups.

“As a nurse, I can’t judge a patient on looks or their background,” he said. “At the end of the day, we all have the same bone structures and blood running through our veins.”

Christie Birchall, a psychology major and criminal justice minor who graduated in December, has found the same perspective since stepping inside SCI-Chester for the post-traumatic growth workshops and George W. Hill Correctional Facility for a summer internship.

“It has taught me a lot about resiliency and gratitude,” Birchall said. “These men have been through every adversity, and they are still willing to work on growing from their trauma.”

Isaiah Washington, a senior nursing major currently in the Inside-Out course, agreed. You can’t assume anything about a person, he said.

“We can’t let one instance define a person, and we can’t define ourselves based on one instance,” Washington said.

Carlie Sisco ‘19, an English and creative writing major, contributed to this story.